Countries tend to vary greatly in how consumption is funded for elderly people. Though the elderly continue to work in certain countries, their labor income is usually too low to cover their consumption. How, then, do the elderly fund their consumption if they consume much more than the labor income they earn? Other sources of income, including assets, public transfer, and private transfer, help to fill in these gaps.

As pointed out in the survey paper (Lee (2016)), the elderly in developed countries rely largely on asset income; this is due, in part, to the more elaborate financial and insurance markets, as well as the more advanced social protection, that are available in developed countries. Using these findings to make inferences about old-age support systems in developing countries would likely be misleading, however, since developing countries vary fundamentally in terms of private transfer traditions and the sizes of their public transfer systems.

Altruism between generations is more pervasive in developing countries because they have less sufficient public transfer, as well as a capital market that is less poorly developed when com­pared to those of other countries. Some researches document altruism motives by studying the predictions of the altruism models (Becker (1974)), which indicate that an increase in public trans­fers would be neutralized by private transfers. For example, Fan (2010) finds that private transfers displace the benefits of public transfers in South Africa. Jensen (2004), as well, finds that a re­duction of private transfers occurs in response to the Farmer’s Pension Program of Taiwan, etc. Finally, Chuanchuan and Binkai (2014) studies what happens to the private transfers of rural resi­dents’ when introduced to the rural pension systems.

Many of these researches focus on “the consequences of transitioning from an unfunded to a funded public pension program.” However, it should be noted that different levels of the public transfer systems in developed and developing countries have varying impacts on private transfers. 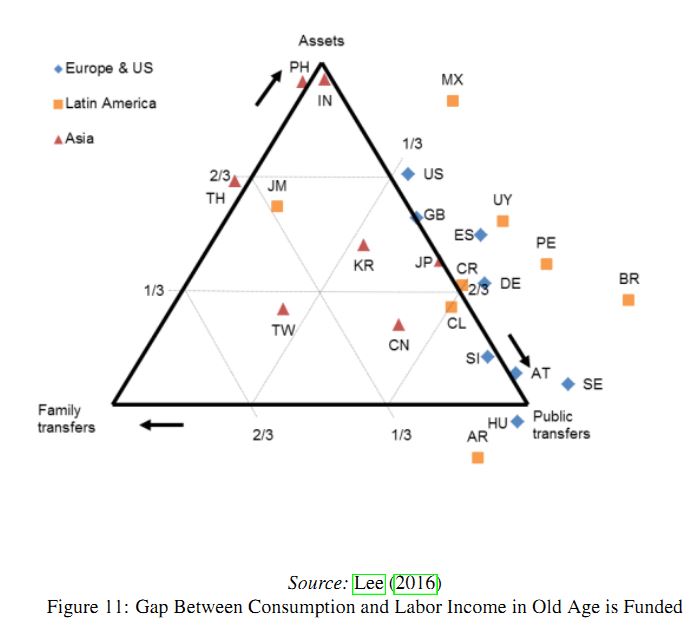 As in Lee (2016), Fig 11 shows how the gap for the elderly is funded. Each vertex refers to a single source of funding. The funding from the various sources is equivalent to 1. Each country, coded according to a two-letter abbreviation, is presented as a point in the figure. For example, in the United States, more than half the funding for the elderly relies on asset income; its representative point, which lies outside the triangle on the right, indicates that it has negative net private transfer. In other words, the elderly in United States make net transfers to the younger generation. However, the point representing China lies inside the triangle, which means it has a mixture of all three funding sources; such funding relies mostly on public transfers, while roughly 30 percent stems from private transfers.