The adjustment of transition processes for worker types to be dependent on employment state has been shown to generate steady state flows in line with the data. Now I consider if the same process can generate similar flows over the business cycle. Starting with the stationary distribution as the initial population, I generate series of flows and populations based on a series of draws of expansions and recessions, and measure the average flow rates in each state of the cycle.

To generate business cycle variation in the model, I draw a series of indicator variables for expansions and recessions from a Markov process which generates a fraction of time spent in recession of 0.156 and expected duration of recession of 9 months, consistent with the data from 1967-2008. I then measure the average arrival rates from U and N and the average separation rate from E in booms and recessions. I also measure the transition matrix for non-employed types using the whole sample. 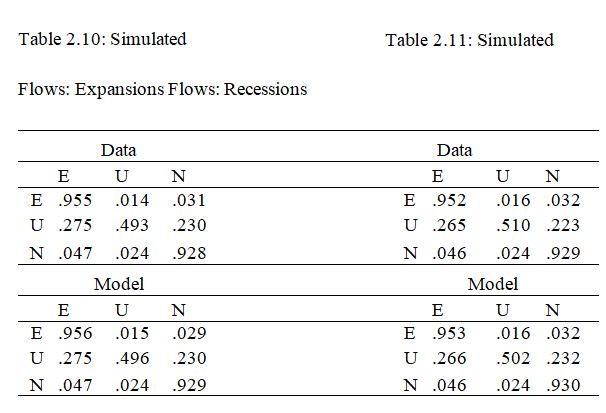 If we measure the average flow rates between U and N in expansions and recessions separately, producing a Markov process for types by business cycle state, we find that the changes in xNon between states is small, but it differs so that low search cost types become less persistent in recessions. That is, those who are in un­employment during recessions are less likely to move to inactivity than those who are unemployed during expansions. Incorpoating this change in the U N transition prob­ability generates a procyclical U N flow, and the model’s simulated flow probabilities match the average flows in the data almost exactly.

The cyclical properties of average stocks is relatively consistent with the data. The properties of flows in the simulated model show that movements of workers from U and N require additional flows beyond simple transitions of binary types. 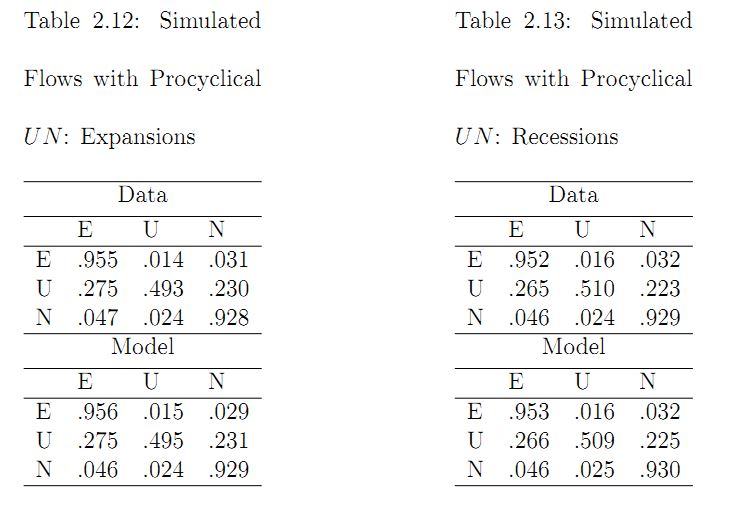 Specifying the heterogeneity that determines ‘type’ and introducing a distribution over this dimension should work to produce flows more in line with the data. Work by Krusell et al. (2012) demonstrates that such a model with participation based on idiosyncratic productivity shocks and search frictions is capable of matching the cyclical properties of stocks and labor flows over the cycle, though it fails to match the steady state levels of these flows.