Insurance policies vary in coinsurance rate depending on the specific tiers that the hospital where the service was provided utilizes. Coinsurance incentivizes patients to seek health care at a lower tier hospital, unless it is necessary to move up to a higher tier. Table 2 shows the comparison of coinsurance rates pre- and post- retirement. Retirees pay about a 5% lower coinsurance rate for outpatient service, and a 7% lower rate for inpatient service.

where s’ and s“ refer to individuals who are marginally above and below s, respectively.

Urban residents in China follow mandatory retirement policies, which are themselves pri­marily based on age requirements. The normal retirement age for females are either 5o or 55 as a cadre, while for males the normal retirement ages are 55 or 6o. In addition, a policy that was estab­lished in 1994 during the SOE (state-owned enterprises) reform in the 1990s states that a female can retire at age 45, 50 or 55 as a cadre, while a male can retire at age 50, 55 or 60.

In this paper, I focus on the peak age of retirement for females (age 50) and males (age 60); other retirement-age thresholds are not considered. A fuzzy design is used in this paper because the size of the discontinuity at age thresholds (again, age 50 for female, age 60 for male) is smaller than one, as reaching the age threshold does not necessarily imply that individuals are actually retired. Though the mandatory rule induces a higher probability of being retired, some individuals may choose not to comply with the retirement rule.

The local average treatment effects of retirement on medical expenses can be recovered for retired individuals around s. 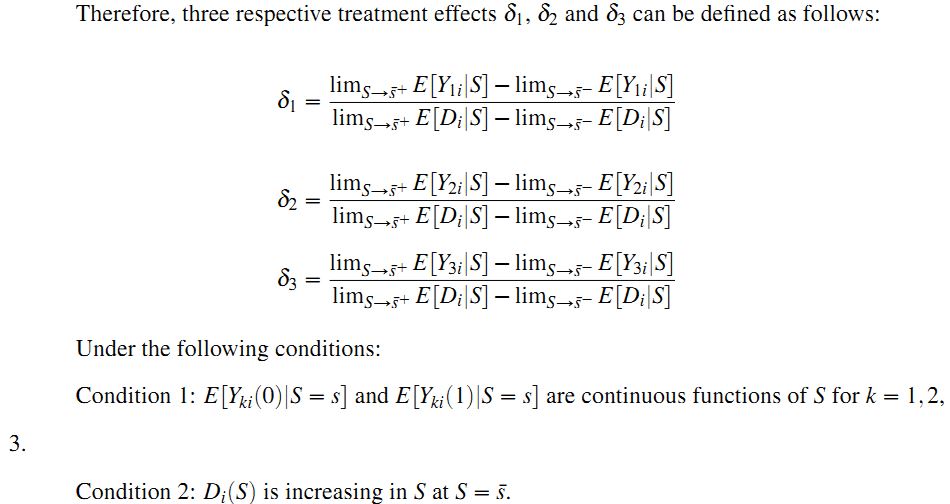