China Health and Retirement Longitudinal Study (CHARLS) 2011 baseline survey is a na­tionally representative survey of the middle-aged and elderly population, as well as their spouses, across 150 counties in 28 provinces across China. Within each household in China, one person was randomly chosen to be the main respondent, after which their spouse was automatically included. Based on this sampling procedure, 1 or 2 individuals in each household were interviewed depend­ing on the marital status of the main respondent. The total sample size was 10,257 households and 17,708 individuals. 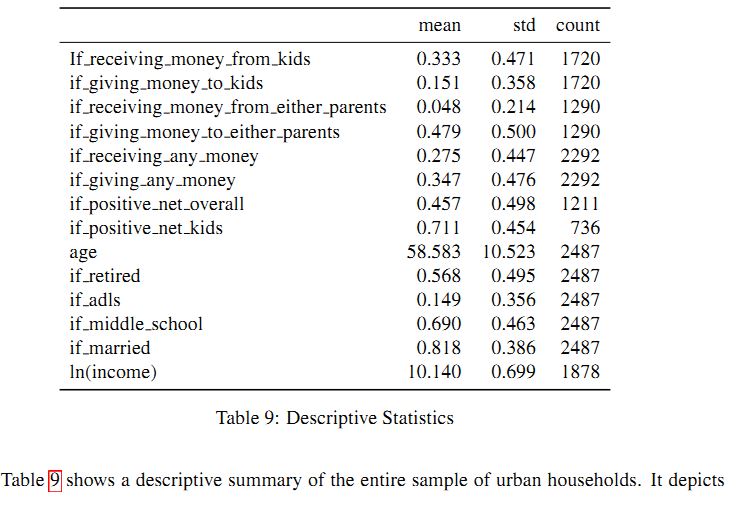 From a certain perspective, upward transfers toward non-coresident parents/parents-in-law are widespread; indeed, 48 percent of the “sandwich” generations are themselves donors of these transfers. Only 5 percent of households receive economic resources from their elder parents/parents- in-law, which implies that these “sandwich” generations are substantially supporting their elderly parents/parents-in-law. This is a strong indication of the filial piety that is so predominant in China.

In table 10, the average net amount of transfers reveals a great deal about the overall flow of economic resources between generations. The upward net amount toward parents/parents-in-law show distinctive transfer patterns from a downward net amount toward their children. On average, “sandwich” generations give a higher amount of transfers toward their elderly parents/parents-in- law. However, such generations mainly receive a positive net amount from their children. This is distinct from patterns in the US, where households dominantly transfer resources to the adult children. Indeed, combining the two-sided transfer income flows reveals a more complete picture of the reality that Chinese households are facing. Overall, they are donors in the family support network, as their overall net transfers are negative on average.

In line with previous studies on private transfer, several variables reflecting households’ de­mographic and socio-economic characteristics are specified. For instance, marital status is divided into two distinct groups: Married and Single (the latter of which includes divorced, widowed, separated, or never married). Education attainment is classified into either Middle-school degree and above, or lower education. Household income includes the pooled income of the main re­spondent and his/her spouse’s income. Adl, which indicates if any of the main respondents and his/her spouses has functional difficulties when undergoing everyday activities, is used as a proxy for health measure.