With the uplift in international climate finance[1] and flows for adaptation (UNEP, 2018), and the emergence of NAPs through to local projects, there is now a greater focus on the economic appraisal of adaptation. Economic appraisal is standard practice in public-sector investment decisions in many countries (e.g. HMT, 2018), as well as in international development finance and overseas development assistance. It provides support to decision makers to help ensure the appropriate use of public finances, and to assess alternative options available for meeting objectives, by assessing costs, benefits and performance against other decision criteria.

These appraisal methods are also used in fisheries and aquaculture management. For example, as set out in the FAO Ecosystem Approach to Fisheries (EAF) toolbox (FAO, 2009), once the set of operational objectives, indicators and performance measures for a fishery have been identified, the next action is to produce an agreed set of management measures to generate acceptable levels of performance. This involves the identification of potential management options and some level of appraisal to determine which of these will be the most practical and appropriate given the fishery’s value and location, and the level of resources available (human, financial and information). This analysis can include quantitative as well as qualitative analyses.

However, there are additional challenges in applying these conventional appraisal and decision-support tools to adaptation, especially for economic analysis (OECD, 2015a). They include the challenges involved in the quantification and valuation of benefits, but also issues relating to uncertainty and to discounting. This chapter summarizes these challenges.

Risk and uncertainty: a conceptual difference

Adaptation aims to prevent or minimize damage, or to take advantage of opportunities, that may arise from climate change. To estimate the costs and benefits of adaptation options relative to a baseline scenario, the projected climate change impacts and the costs of different options must be examined. In this regard, it is important to clarify on what basis the assessment can be made, and more specifically, to keep in mind the difference between the concepts of risk and uncertainty.

The economics literature generally uses the two terms in a very distinct way (see Box 1). The economic definition of risk is the likelihood, measured by its probability, that a particular event will occur (see for example, HMT, 2011). It is partially reflected in the climate change literature, with risk defined (IPCC, 2014) as “The potential for consequences where something of value is at stake and where the outcome is uncertain, recognizing the diversity of values. Risk is often represented as probability or likelihood of occurrence of hazardous events or trends multiplied by the impacts if these events or trends occur.” However, the IPCC (2014) also uses the term “risk” as an overarching term in its core concepts, whereby risk is the combination of hazard, exposure and vulnerability. For example, “risk is often used to refer to the potential, when the outcome is uncertain, for adverse consequences on lives, livelihoods, health, ecosystems and species, economic, social and cultural assets, services (including environmental services) and infrastructure” (IPCC, 2014). 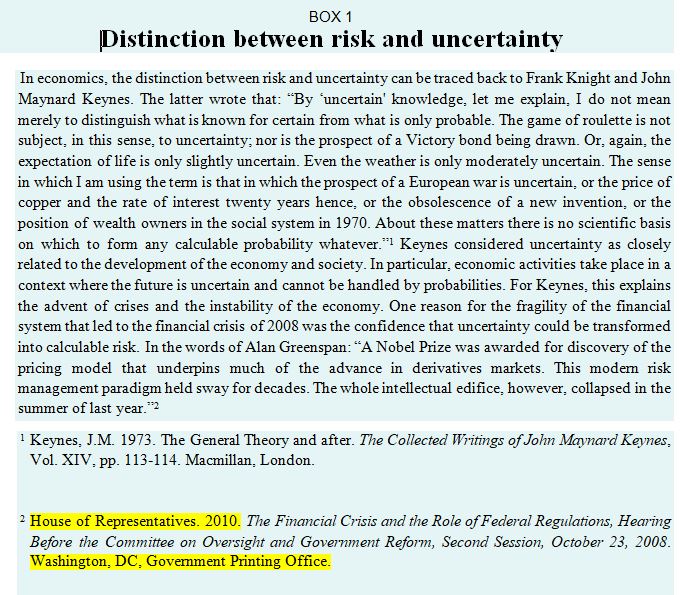 On the other hand, uncertainty generally relates to a case where it is impossible to attach probabilities to outcomes (see for example, HMT, 2011). It has been defined as: “A state of incomplete knowledge that can result from a lack of information or from disagreement about what is known or even knowable. It may have many types of sources, from imprecision in the data to ambiguously defined concepts or terminology, or uncertain projections of human behavior.” (see Moss and Schneider, 2000; Mastrandrea et al., 2010).

This publication uses the term risk when it is possible to estimate the probability of certain events or outcomes, based on existing data, and therefore to consider economic analysis. Insurance companies calculate premiums based on risk estimates. This is because they can estimate the probability and costs of an event by referring to time series and statistical data (for example, number of car accidents, probability of death or illness for each age, or number of extreme weather events recorded in the past and their economic effects).

This publication uses the term uncertainty when there is no scientific/factual basis for deriving a risk estimate, i.e. where it is impossible to attach objective probabilities. Making decisions under uncertainty is therefore more difficult and involves the use of principles or criteria that will vary with the decision (for example, these may relate to the minimization of reasonably foreseeable damages, or the use of estimates that may resemble risk assessments). Interestingly, in fisheries and aquaculture, the concept of uncertainty prefigures the precautionary principle (Code of Conduct For Responsible Fisheries, article 7.5 [FAO, 2011]).[1]

Therefore, although decisions can be made under uncertain conditions, the basis is quite different than when making decision under risk. There is in fact no factual basis against which to measure the probability that a particular event will occur. On the other hand, in the case of risk, predictions can be quantitatively substantiated.

Turning to the nature of the events subject to risk or to uncertainty, several considerations need to be made. First, there is a profound difference between projecting natural phenomena (such as flood probabilities) and forecasting economic or social processes. For the former, probabilistic modelling can be used, for example, looking at the probability of defined events and building up an overall probability-loss analysis. For the latter, as seen in Box 1, uncertainty is at the heart of these social and economic processes, which are by their nature unpredictable, especially in their long­term evolution. In summary, when considering history and society in the long term, deterministic or stochastic methods need to be used with caution. A key issue here is that climate change is determined by future social and economic change, with different futures leading to alternative future emission pathways, such as low- or high-warming pathways. This means that while it is possible to use climate models to assess the changes from any one specified emission trajectory and its associated radiative forcing (as captured in the alternative representative concentration pathways [see IPCC, 2013]), there is uncertainty over which emission pathway future will occur, which is determined by the socio-economic future. Shared socio-economic pathways (O’Neill et al., 2014) provide socio-economic data for alternative future pathways and include differing estimates of future population and human resources, economic development, human development, technology, lifestyles, environmental and natural resources, policies and institutions, which in turn affect exposure, vulnerability and risk.

As a consequence, it is very difficult to evaluate localized impacts of future climate change in probabilistic terms. There are several reasons for this, starting with the underlying uncertainty around socio-economic futures (which determine emissions) and the difficulty of assigning a statistical probability to future scenarios (due to the complexity of the variables and feedbacks involved in the construction of the models at the local level). There have been examples where probabilistic projections have been derived, but these are only for individual emission pathways (or representative commission pathways) (see for example, Murphy et al., 2009), not for all possible emission pathways as one single composite probability. In other words, uncertainty is the consequence not so much of the nature of the phenomenon itself, but of insufficient knowledge of the dynamics connected to the phenomenon. The difficulties in assessing future climate impacts are due to (National Research Council, 2010):

In the context of climate change adaptation, the issue is particularly complex, as uncertainty (relating to these factors) expands and proliferates at each stage of analysis (Figure 1). Thus, it is actually more accurate to speak of a “cascade of uncertainty” (Wilby and Dessai, 2010) whereby: “A cascade of uncertainty proceeds from different socio-economic and demographic pathways, their translation into concentrations of atmospheric greenhouse gas (GHG) concentrations, expressed climate outcomes in global and regional models, translation into local impacts on human and natural systems, and implied adaptation responses. The increasing number of triangles at each level symbolize the growing number of permutations and hence expanding envelope of uncertainty.” 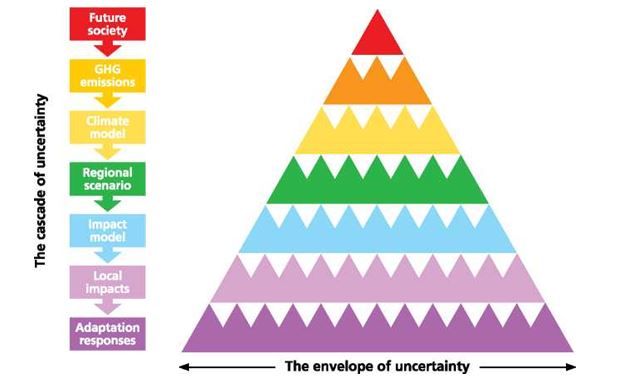 This means that it is difficult to predict and optimize adaptation. Uncertainty has long been recognized as an issue in the adaptation literature. However, it has also become a major focus of the economics of adaptation in recent years (Watkiss et al., 2014). The following section sets out some of these issues and how they can be addressed.