From an economic perspective, the benefits of investing in a specific adaptation action equal the reduction in the economic damage caused by climate change. Figure 2 shows how these costs and benefits can be represented theoretically (Stern, 2006). However, as highlighted above, it is often not possible to characterize a quantitative approach to implement this due to uncertainty.

Future climate change will lead to economic costs (damage) that increase over time, shown by the red line in Figure 2. Adaptation can reduce these costs downwards, but it is unlikely to remove impacts completely. Therefore, there is residual economic damage even after adaptation (shown by the dark blue line). The reduction achieved by adaptation (to the level of residual damage) reflects the gross benefit of adaptation, i.e. the avoided damage. However, adaptation has a cost, which needs to be added to the residual damage (shown by the green line) to estimate the total cost of climate change with adaptation. 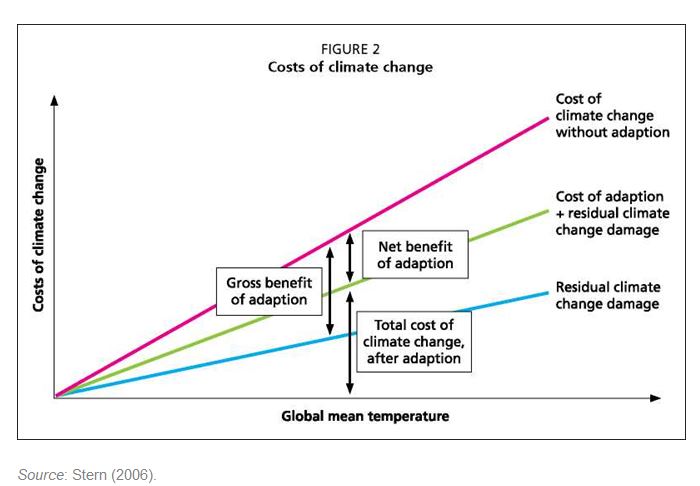 Using these types of frameworks, the analysis of the costs and benefits of adaptation can be considered in the broader context of economic appraisal. The analysis of adaptation options, as part of the development of policies, plans and projects, is often subject to a process of appraisal, which aims to identify the best way to deliver the objectives.

For public policy, this includes the economic justification for intervention, as well as an economic appraisal of alternative ways of delivering the objective. As highlighted above, this includes the identification of options that could meet the objectives, and an appraisal of their costs and benefits (from a societal perspective). This allows resources to be allocated efficiently against other priorities and allows prioritization from alternative options. This type of economic analysis is carried out from the perspective of the entire economy, and it assesses the impact of a plan or project on the welfare of all of society. The analysis includes the economic valuation of non-market areas, such as environmental costs and benefits, and it considers economic rather than market prices (noting that because of this, it differs from a financial appraisal). This differs from a purely financial appraisal, which considers options from an individual perspective, and excludes non-market prices.

The need to consider both market and non-market aspects is critical for the economic appraisal of fisheries, especially given that fisheries involve natural resources. However, the analysis of these two aspects calls for different approaches.

Where markets exist, there are often prices available that can be used in appraisal.

To expand, when reference prices are available, economic theory recognizes that these prices are not necessarily a measure of economic well-being. For example, the benefits of an antibiotic or the access to drinking-water, may not be represented by their price. In economics, benefits are measured by the “consumer surplus”, that is, the difference between what consumers are willing to pay and what they are actually paying.

The second issue is what to do when no market prices exist, i.e. for non-market sectors. This can be particularly relevant when considering fisheries ecosystems. In such cases, there are economic approaches that can be used to derive costs and benefits, for use in an economic analysis. For adaptation, these methods (Metroeconomica, 2004) include:

These methods have been described in the environmental economics literature for many years, but their application to adaptation is at an early stage. There are also some major challenges in applying them to the climate change context. A key problem is that even if there are estimates of the value of an ecosystem, there is often a lack of quantified information on the impact of climate change on this system (i.e. the attribution of climate change to the impact) and even less information on the exact benefits (in reducing these impacts) that adaptation will deliver.

The revealed and stated preference methods refer to the payment capacities of the individuals involved. Their scientific and theoretical basis is much discussed, both on the level of accountability of the techniques used, and on the level of equity and ethical and distributional issues (see Box 2). 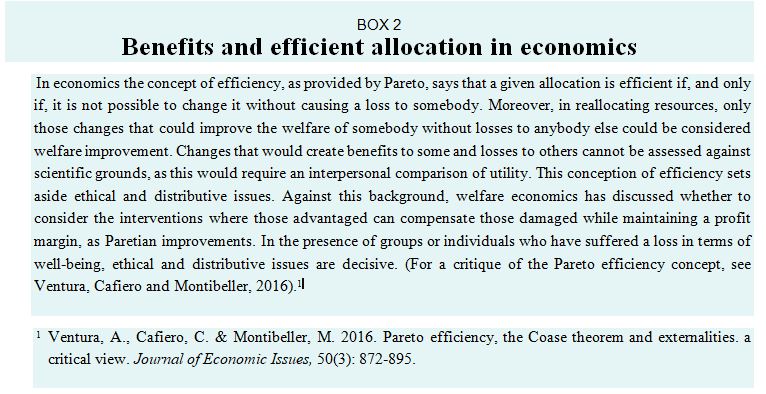 It is possible to briefly illustrate the issue by discussing a problem related to the difference between WTP and WTA. Researchers find that the two estimates do not match.[1] The problem is prominent because the efficient choice changes when one or the other of the two references is followed.

As an example, following the WTP measure, one would ask a fishing community how much they are willing to pay in order not to be deprived of the ecosystem on which their subsistence depends (including their social life). The amount/price provided is defined/limited by their financial resources. Following the WTA measure, the same stakeholders/group/individuals are asked how much they are willing to receive in order to consent to the destruction of the same ecosystem. The amount/price put forward could be very large, and the community unwilling to compromise.

The value of the resource can vary considerably, depending on whether, to arrive at a monetary estimate, the WTP or the WTA is used. A way to summarize the problem is to observe that the divergence between the results lies in the different starting points. The WTP method starts from the subtraction of a right and asks how much the group/individuals are willing to pay to regain it. This deprivation makes the group poor – the latter can pay little to maintain the right itself. In the WTA case, the starting point is the assignment of a right and the question is at what price they are willing to sell it. This makes stakeholders wealthier and free to choose. It is expected that they will not be willing to sell their right for the same amount as in the previous case. The outcomes from the WTP and WTA methods cannot therefore coincide.[2]

The example helps detail the difficulties encountered in defining the economic efficiency of a policy or an investment regardless of non-economic considerations, such as equity issues or problems related to the allocations of rights (Ventura, Cafiero and Montibeller, 2016). In general, due to differences in the ability to pay, monetary estimates of this nature (particularly those used in CBA) attribute little value to the natural environment in poor areas and more value in the rich ones. Thus, from a strictly economic point of view, the same damaging effect (e.g. destruction of an ecosystem) can be efficient (in the sense that it is not worth investing to avoid it) or inefficient (i.e. it is worth investing to avoid it), depending on the wealth of damaged stakeholders. Similarly, investing in “adaptation” may be efficient or not, depending on whether it benefits high- or low-income populations. To address these difficulties, a common practice is to correct monetary estimates by using equity weights, which recognize that USD 1 lost or gained to a poor person is worth more than USD 1 lost or gained to a rich person (Adler, 2016).[3] However, the application of such rates is rarely undertaken in economic appraisal, and more typically, different options or policies are assessed qualitatively in terms of their distributional consequences.