The competitive equilibrium of the decentralized problem involves history­contingent and cohort-dependent policy functions for firms. Solving for the decen­tralized competitive equilibrium requires the tracking of the composition of worker cohorts within firms of different sizes and age-groups in all potential aggregate and idiosyncratic histories. The welfare theorems apply in this framework, so it is possible to solve an equivalent planner’s problem. I show that the planner’s problem simpli­fies to solving the maximization problem of the value of an individual firm given its current state, independent of cohorts and histories.

The sequential planner’s problem is to maximize expected discounted output net of firm entry costs, opportunity costs of work, and recruitment and operating costs of the firm, subject to the constraint of having a unit mass of workers. Let ^(ztj) be the probability of aggregate history zt given the transition matrix for aggregate states and N(xj, zt) denote the measure of firms of a particular history. The planner’s problem is: 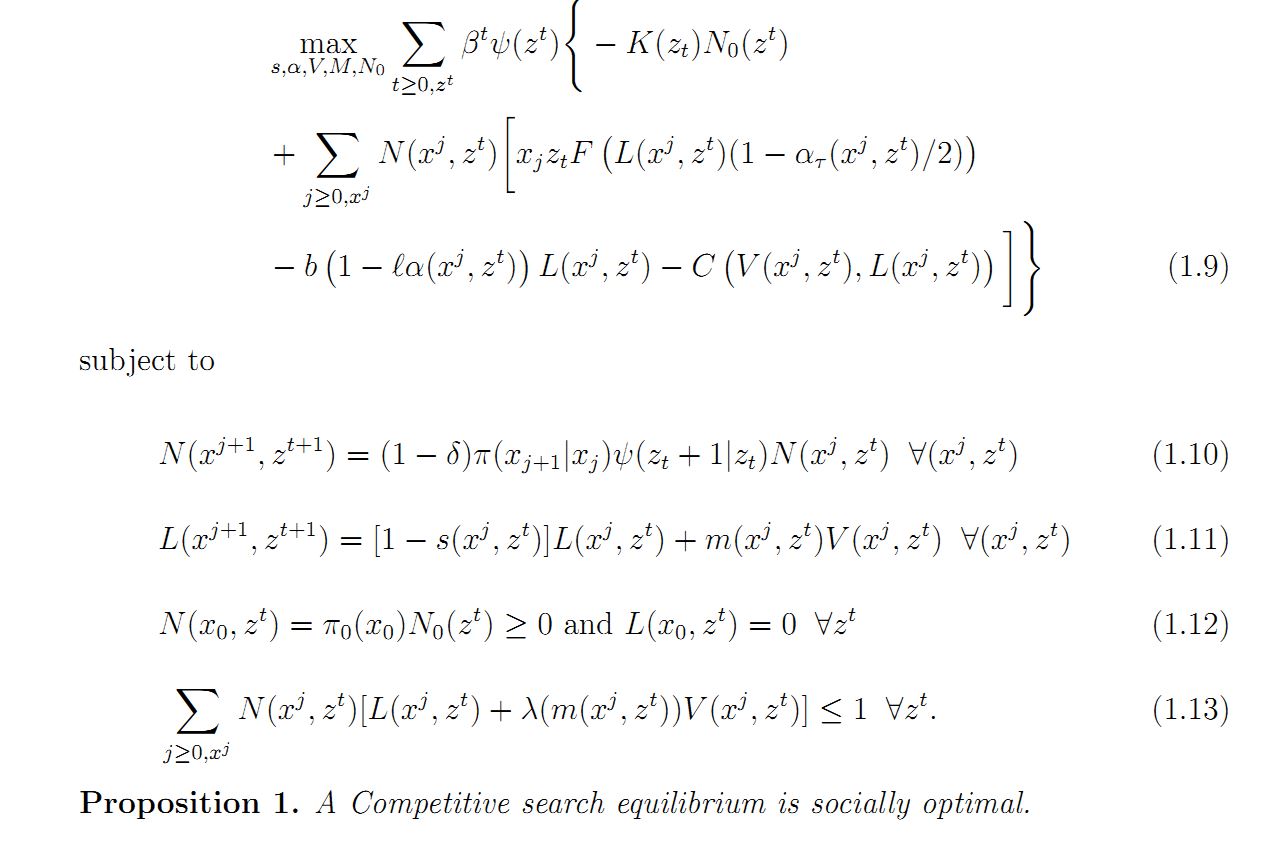 The planner’s problem specifies history-contingent, cohort-contingent policies as in the competitive equilibrium. There exists, however, a solution to the planner’s problem where policies are not only cohort-independent, but also independent of idiosyncratic and aggregate histories. Further, the planner’s problem can be rewritten as the sum of recursive problems maximizing the social surplus of each firm. The value of a worker to the planner is given by the Lagrange multiplier on the aggregate feasibility constraint (1.13). Given a vector of multipliers for the aggregate resource constraint (1.13), M = (^1,…,^n) for each z G (z1,…,zn), the social value of a firm with productivity x and z and labor stock L satisfies the following Bellman equation:

The result that the planner’s problem is cohort-independent follows from the fact that workers are identical and have linear utility, so they are indifferent about the time-path of payment. Thus, the planner gains nothing by specifying cohort-specific policies. Further, any sequence of history-contingent policies in a decentralized equi­librium can be reproduced by the planner using policies that only depend on current states of idiosyncratic and aggregate productivity. This is due to the fact that the so­lution to the planner’s maximization problem for the social surplus of a firm dictates the planner’s optimal policy for the firm as a function of firm size, current produc­tivity, and the social value of a worker, ^(z). If entry is positive, then ụ,(z) is pinned down by the entrant firm value that satisfies the free-entry condition (which is only a function of the aggregate state zt) with equality. Since the social value of a worker is identical across all firms, and the social value of any firm can be solved for any size L and productivity realization x, z given ^(z), the planner’s problem for each firm can be solved given ^(z). Thus, entry and firm-level policies and value-functions can be solved where the only aggregate state variable for the planner is the current realization of zt .

Conversely, the solution of the planner’s problem with history-independent policies coincides with a solution of the competitive equilibrium. There are many decentralizations that yield a payoff-equivalent allocation to the planner’s problem, though not necessarily the same allocation as the planner. This is due to the lin­earity of workers’ utility so that the time-path of payments doesn’t matter to the worker. Also important is the redundancy of cohort-specific policies for the planner. One simple example of a decentralization of the planner’s allocation is if firms offer contracts which provide a “constant utility” contract by offering a constant full-time wage and a constant part-time wage. The firm provides the same utility for part-time workers as it does for full-time work after accounting for the utility gained in leisure during part-time. Workers commit to employment until the firm destroys the match, and they are indifferent between full-time or part-time employment. In general, the nature of the contract and the ability for either workers or firms to commit to specific actions will affect the time-path of payments.