The IET survey asks firms why they like to be involved in innovative activities. About 73% of firms, which replied to this question, do it in order to improve financial situation. It appears that they often achieve this goal through decrease of the costs of production (64%). Increase (or preservation) of the market share (66%) or accessing new markets (59%) are also among the major reasons of doing innovations. The percentage of firms, which consider getting access to the international market as an important goal of innovation activities, is fairly large – 31%, but most of the firms still consider domestic market as the major market for their output. At the same time, only 7% of firms would like to become suppliers for the foreign firms working in Russia. Only 14% consider innovations as a way to improve capitalization of the company. This last number is consistent with the finding of Guriev et al (2003), who used similar dataset to study corporate governance of Russian firms. Guriev et al (2003) argue that most of the firms in the IET sample do not care about market capitalization, because are not traded openly on the market. Finally, about 11% of firms answered that they consider innovations as a way of decreasing dependence on suppliers, meaning that these firms would like to replace foreign-produced or outsourced inputs with inputs, outsourced to domestic suppliers or produced in-house. Such behavior can be a part of cost-decreasing strategy. 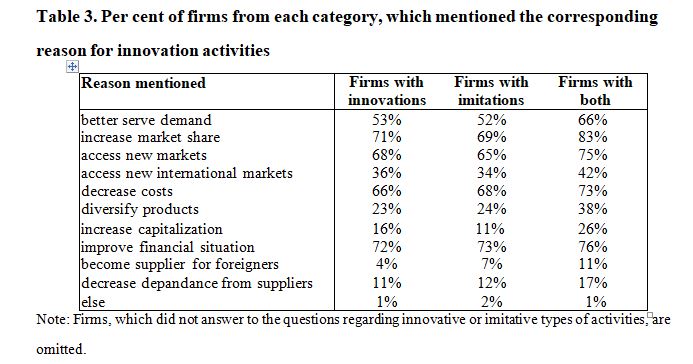 In Table 3 we compare motivation for innovation activities for firms, which conduct innovations, imitations, or both. There seem to be not that many differences in motivations across different groups of firms. The group, which conducts both innovations and imitations, is slightly different from the other two groups. Firms, which belong to this group, mention each goal more often than other firms. The difference is particularly large when they answer the question about increase in market share and product diversification. In addition, these firms more often than others care about market capitalization – this result is very interesting in light with the results about corporate governance, which we will show later. Finally, this firms care the most about becoming suppliers for foreign firms. Naturally, those firms, which conduct innovations, are the ones, which consider the possibility to become suppliers for foreign firms as the least important.