Incorporation of a transition process that depends on a worker’s employment status should help the model to match the flows in the US labor market data. It would be ideal to use observed movements of agents in micro level data to verify that transitions between worker types in the data are consistent with what is needed to match flows in the model. As my framework allows both types of agents to be employed, transitions between types are only observable in nonemployment when agents’ search behavior can be observed, making it difficult to pin down what the transition process for employed individuals would be in the data.

With longitudinal data, one can estimate this transition process by observing the search decisions of agents before and after complete employment spells of vary­ing durations. Unfortunately, the rotation sampling and short duration of household participation in the Current Population Survey makes it only possible to observe extremely short employment spells from match to separation. To overcome this prob­lem, I use the Survey of Income and Program Participants (SIPP), which is a large panel survey of households with demographic, income, and labor force participation information for individuals over the span of 3 to 4 years. I use the 1996 panel of the SIPP data as it is the longest panel at 48 months. It also incorporates many of the redesigns used in the CPS after 1994. The following table shows the monthly labor flows for the SIPP from 1996:1-1999:12. 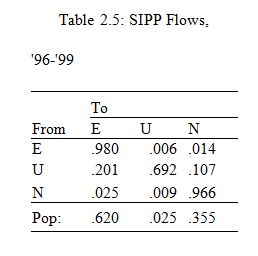 I use the panel structure of the 1996 SIPP data to identify agents’ types when entering employment by observing whether agents who move to employment came from inactivity or unemployment in 1996. I then follow these individuals over the course of the panel and observe the search decisions of workers once they separate from their job. In this way, I have the starting and ending type for every complete job

spell started in 1996. I choose to only observe spells that begin in 1996 to avoid over­sampling short employment spells.[1] I can estimate from this sample of employment spells a Markov transition process that will fit the observed transitions of type from before and after each spell.

To measure the transition rate of worker types in employment, I estimate a Markov transition matrix where not every state is observable in each period, as out­lined in Sherlaw-Johnson et al. (1995). An ideal data set would have information on a worker’s intention to search

should they end up jobless in each period, so that a worker’s type could be identified throughout an employment spell. Since this state can only be observed the month before and after a job spell by observing search ac­tivity when the worker is not employed, the employment spell is effectively a length of unobserved transitions over type. In this sense, each complete job spell can be seen as one observation of the outcome of the transition matrix for employed workers multiplied by the probability of remaining employed for each type for t periods. Be­sides the transition matrix, this also provides an estimate of the separation rate for each type. I then test the restriction that the separation rate is independent of type. Let the transition matrix X1_Ổ include the probabilities of remaining employed and possible transitions between types. Then ỵ1–S is:

And the transition matrix Xổ incorporating the probability of separating from em­ployment can be written as: 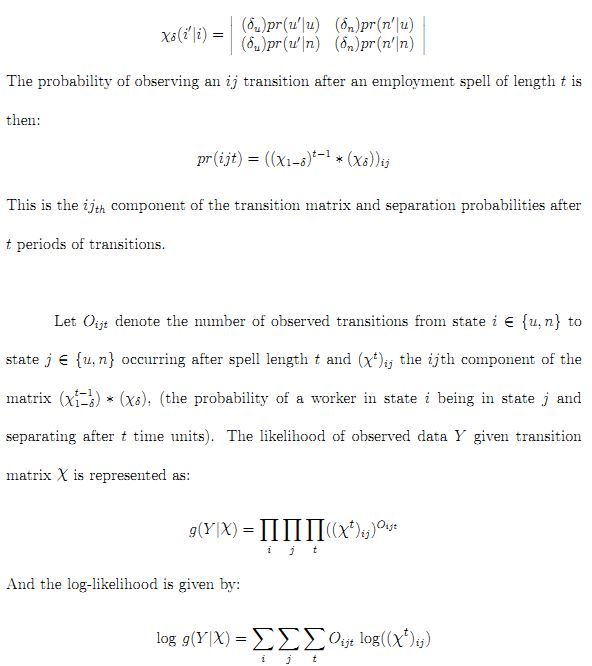 I estimate the transition matrix x from 5,786 job spells initiated in 1996 which terminate before the end of the sample. Each job spell has an initial and final state corresponding to the worker’s search activity the month before and after
employment, and the length of the employment spell in months. It is important to note that this estimation ignores incomplete spells, as only complete employment spells yield enough information to estimate the transition process. The estimation does not include workers who entered the data sample in employment, as their initial type cannot be observed by whether they joined employment from nonparticipation or unemployment. Similarly, I must exclude workers who leave the sample still employed, as their type cannot be inferred until a worker separates. About 38% of employment spells started in 1996 do not separate before the end of the sampling period.

The resulting transition matrix is estimated from the complete employment spells, with standard errors in parentheses: 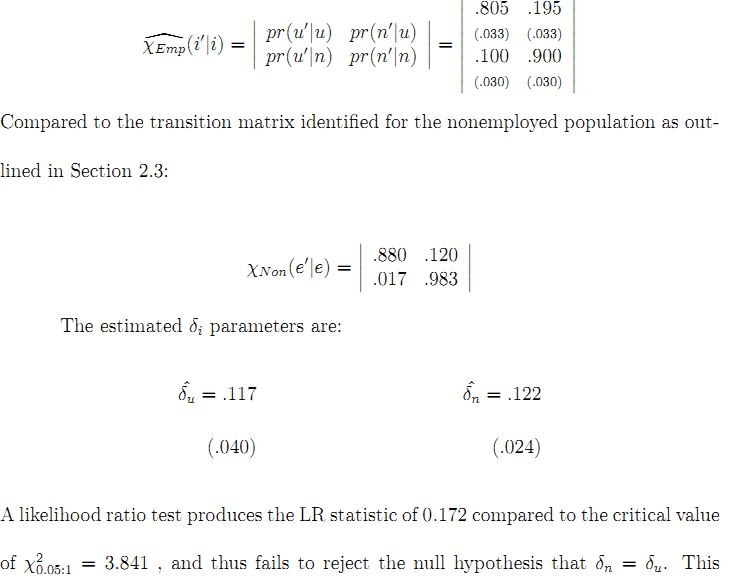 rules out the possibility that different separation rates by type can account for the different flow rates out of employment for unemployed workers and nonparticipants. The restricted estimate for Ỏ that is identical for each type is:

Figure 2.1 also illustrates that the two groups experience roughly the same separation rates for the duration of the sample. I split the observed employment spells into those that originated from U and N . I repeat the same exercise but split the population by workers’ types when they exit, regardless of their type upon entry in figure 2.2.

The fact that Ỏ cannot account for the difference in separation rates to U and N implies that these differences must come from the evolution of these types in em­ployment. The difference between the transition matrix for employed individuals and that of the nonemployment pool is that searching types are more persistent in the em­ployment pool than in the nonemployment pool. In fact, the stationary distribution of the transition matrix produces the appropriate stock of 2/3 “high search cost type” workers and 1/3 “low search cost type” workers in the employment pool. Although there are an infinite number of Markov processes that generate a particular stationary distribution, estimating the transitions of types over employment spells identifies the unique transition process that best fits the data for this subset of employed workers.

In the examples in this paper, I have used the CPS flow rates as they are avail­able for a longer time frame than for the SIPP. Using the transition process estimated

Figure 2.1: Separations of Workers by Initial Type Before Employment Spell 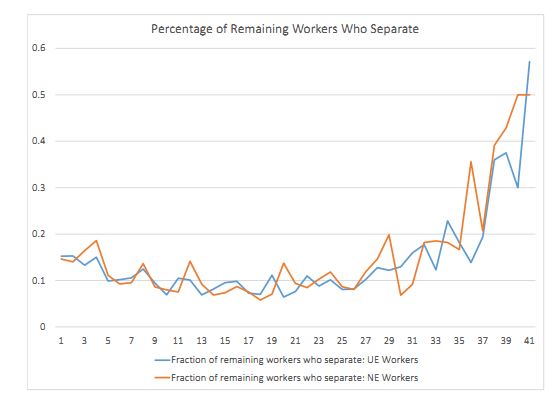 Figure 2.2: Separations of Workers by Type After Employment Spell 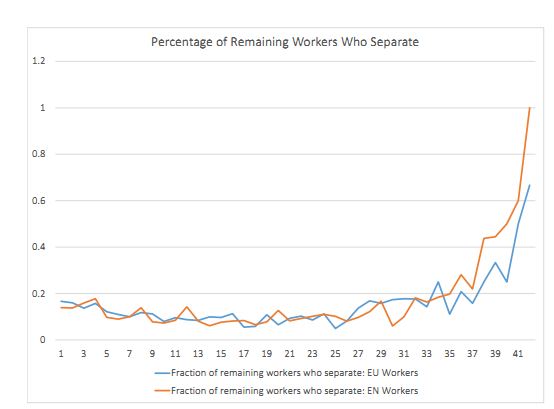