The urban residents in China provide a good opportunity to study whether a consistent private transfer pattern for these “sandwich” generations is capable of existing over the course of their life cycle regardless of the impact of modernization. These urban residents participate in a pension system that reflects the growth benefits of modernization and development since pensions are linked to the average local wage. As exhibited in Fig 12, the pension per capita in China has enjoyed a 10 percent growth rate over the past 10 years.

According to the policies in place, both employees and employers are required to make con­tributions to the pension system. Workers contribute based upon their individual wage (a rate of up to 8 percent) while employers contribute a percentage of the total wages paid to their workforce (usually around 20 percent). The exact contribution rates vary from region to region. Workers’ contributions are paid into a personal account; upon retirement, the balance of the account, in­cluding interest, is divided into 120 installments that are to be paid out monthly over a ten-year period. In addition, the worker also receives general pension payments that are payable until death. The general pension payments are determined by the number of years of employment, the average local wage, and the worker’s life expectancy. These general pension payments are funded by the employer’s contributions, though the government is legally obligated to cover any shortfalls.

Conversely, the emerging literature has identified the degree to which private transfers are constrained by cultural, familial or religious norms. Indeed, researchers (Lindbeck and Nyberg (2006), Cigno, Giannelli, Rosati, and Vuri (2006), Cigno, Komura, and Luporini (2017)) have at- 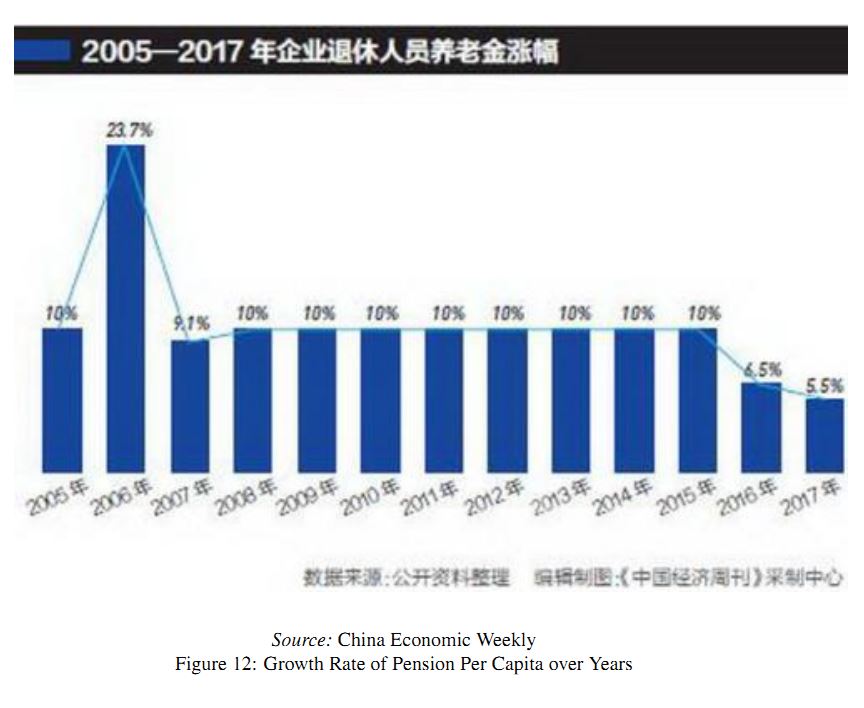 tempted to explain the emergence and persistence of social and familial norms between generation. In China, for instance, the expectation that children will care for the elderly is a deep-rooted tradi­tion. According to Confucian ethics, filial piety is a sign of respect for one’s parents, elders, and ancestors. In more general terms, filial piety means to be good to one’s parents by taking care of them.

In fact, the expectation that adult children will support their elderly parents is included in both the Constitution of the People’s Republic of China as well as the Marriage Law.

Given these societal expectations, it is vital that researchers consider how the “sandwich” generations’ decision to retire impacts the family support network. China’s strong family support tradition and growing pension support system establishes it as an ideal setting to assess these im­portant topics, predominantly how both private transfer and public pension scheme support elderly population.